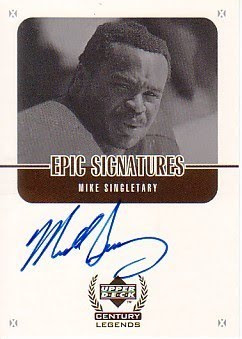 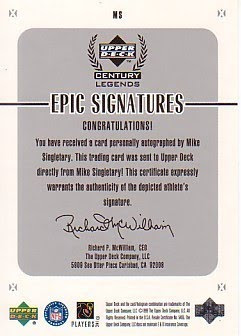 Well here is the second autographed card that I ever pulled, it is a 1999 Upper Deck Century Legends #MS Mike Singletary. Former linebacker for the Chicago Bears and most recent former head football coach of the San Francisco 49ers. He is an intense player and expects the best from his players and that he did not get from the 49ers, so out the door he went. I think that he will be back as a head coach somewhere, perhaps in the college ranks once bowl season is over and the ax falls on college football head coaches.
Posted by Eli at 2:08 PM