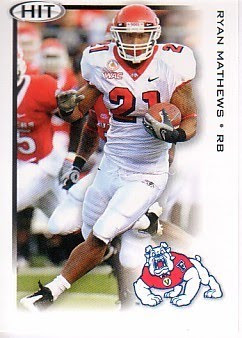 Well I know it's not football season yet, but I wanted to take some time to do a quick post on football, namely on running back Ryan Mathews out of Fresno State University, the number one draft pick of the San Diego Chargers in this years NFL Draft. This guy is a workhorse, he is tough to bring down, is quick on his feet and has good hands. So whether running from the backfield or catching a pass down field, he will play a key role with the Chargers now that LaDainian Tomlinson is no longer on the team. It will be tough to do, but I believe that he can do it and will fit in well in the Chargers offensive plans. I got to follow his career at Fresno State and plan on following him in the NFL. I will be adding him to my own football card collection. The card pictured is a 2010 Hit Football #21, the only card of Mathews that I have at the moment, but hope to add more once the season is upon us.