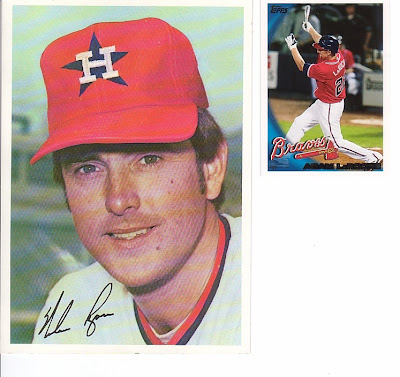 Here is an oldie but a goody from 1981 Topps. As you can see, these cards are big, roughly about four times the size of your standard issue baseball card. I have three of them including this Nolan Ryan card, it is one of six Houston Astros cards, the other Astros in this set are Cesar Cedeno, Jose Cruz, Art Howe, Terry Puhl and Don Sutton.
I also have the Texas Rangers' Al Oliver and Buddy Bell cards, the others in that set are Jon Matlack, Mickey Rivers, Jim Sundberg and Bump Wills.
Back then you could order these cards in 18 card team sets for $5, available for these teams, Yankees/Mets, Dodgers/Angels, Rangers/Astros(12 cards), Cubs/White Sox. The Reds, Phillies and Red Sox were in 12 card sets each. I don't know what players were in those sets, but it would have been nice to be able to have them all. Just a quick trip down memory lane in 1981.
Posted by Eli at 2:58 PM 1 comment: 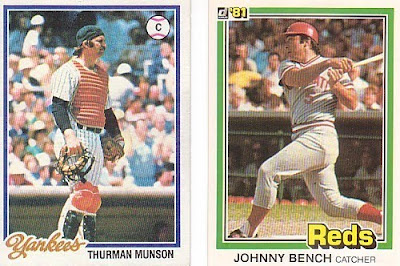 As a kid watching baseball, the position of catcher was and has always been my favorite. There have been some great one's in the history of baseball and two of my favorites were Thurman Munson and Johnny Bench.
I was never a Yankees fan, but I was always a fan of the late great Thurman Munson. He was a 2 time World Series Champion, 6-time all-star, American League Rookie of the Year in 1970, the American League MVP in 1976, 3 time Gold Glove winner. Thurman Munson's locker has remained empty ever since his death. It serves as a small, silent tribute to this much-missed Yankee ballplayer.
Johnny Bench was a 14-time All Star, 1968 Rookie of the Year, 2 time NL MVP, 2 time World Series Champion, 1976 World Series MVP, 10 time Gold Glove winner.
Here Munson is shown on a 1976 Topps #60 and Bench on a 1981 Donruss #182.