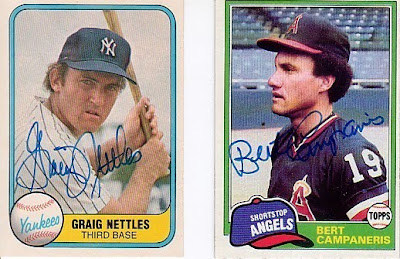 Here are a couple of old school signatures that my wife got for me when these guys came to town. I was deployed at the time so I was not able to be here to see them in person, but I dug these cards out for her and she went and got them signed for me. I have a few other players signatures that she got for me from this same event that I will post sometime in the future.
The Nettles card is a 1991 Fleer and the Campy card is a 1991 Topps, I can't remember exactly when it was she got these signatures for me, but she said that all the players that were there were very nice and were happy to sign for the troops. 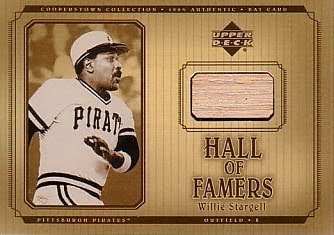 Willie Stargell was one of my favorite players when I was a kid, I remember watching the Pittsburgh Pirates make that 1979 run to the World Series, what a post season that was for Pirates fans and baseball fans. There were many great players on that team, from Manny Sanguillen, Bill "Mad Dog" Madlock, Ed Ott, Tim Foli, Omar Moreno, Dave "The Cobra" Parker, Phil 'Scrap Iron" Garner, Mike "The Hammer" Easler and many others. But Pops was the main man, the leader of that club, that great smile of his was addicting and no one could resist being a fan of Willie.
The one memory I have of him that always stands out to me is when the Pirates were playing in a game, I can't remember who the opposing team was, but I recall Willie tried to steal second base, he took off from first, slid into second, but the only problem is that when he slid, he came up about 4-5 feet short of the bag. The second baseman simply walked over to him as Willie lay on the dirt laughing and tagged him out, he truly was one of the greats of the game. This particular card is the very first game used card that I ever pulled, it is a 2001 Upper Deck Hall of Famers.
Posted by Eli at 1:09 PM 1 comment: "Deep to left! Yastrzemski will not get it! It's a home run! A three-run homer by Bucky Dent! And the Yankees now lead by a score of 3-2!" - New York Yankees announcer Bill White (October 2, 1978).
Russell Earl O'Dey aka Bucky Dent had just hit a dramatic home run in what was to become one of the great moments in baseball and one that added more fuel to the fire to the Yankees/Red Sox rivalry. This particular card has special meaning to me even though I am not a Yankees fan. It is the very first ever autographed card I ever pulled. A 1999 Upper Deck Century Legends Epic Signatures card. I was so very happy when I pulled this card, finally something cool I felt like a kid on Christmas morning. That was many years ago, but I remember that moment like it was yesterday. One of the many reasons that I love this hobby and that I love the game of baseball.
Posted by Eli at 12:33 PM 4 comments:

Hello everyone, this is my first sports cards blog, so we shall see how it all turns out. Well I first I would like to introduce myself, my name is Eli, I began collecting cards as a kid back in Texas, mostly baseball and football at that time. I am a Cubs fan, but I also follow the Houston Astros, San Francisco Giants, Dallas Cowboys and have an immense passion for college football. I collected on and off over the years, but then I stopped completely. Then I got back into it in the 80's and tried to collect everything and anything, every sport, every brand, you name it, I probably tried to collect it. I think that many collectors at that time were doing the same. A set of these cards, a set of those cards, too many different sets out at that time, huge sets, it was difficult trying to complete them all, so I gave it up on collecting once again.
After sometime away from the hobby, I jumped back in. But this time, I decided to concentrate on collecting my favorite players instead, it was more relaxing and something that my wife and I enjoying doing together. My current player collections are of Ryne Sandberg and Ivan Rodriguez in baseball and David Carr in football. I do plan on adding more players to my collection, but at this time, I'm not sure on who it will be. I still do not collect sets and do not buy boxes of one brand or another, I am more of a pack rat so to speak. I prefer to buy packs new and old of different brands and seeing what cards I get in each one. I find it more fun that way. I am not doing this for the money, but for the joy the hobby brings.
As far as this blog goes, I want to use it as a means of connecting with other sports cards collectors and as a platform to begin trading cards with them. I just recently completed organizing my cards to make it easier to search for players. I think that I can still tweak it a bit more to make it easier, but for now it works as is.
I have read many of the sports cards blogs out there, but there are a few outstanding one's that I truly enjoying reading and go back to each and every day. Many of those were the itch that got me going again in collecting and in starting this blog. So I hope to get to know you and trade with you and most of all make new friends in the process. Well until then, take care, keep collecting,