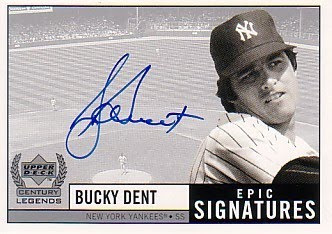 "Deep to left! Yastrzemski will not get it! It's a home run! A three-run homer by Bucky Dent! And the Yankees now lead by a score of 3-2!" - New York Yankees announcer Bill White (October 2, 1978).
Russell Earl O'Dey aka Bucky Dent had just hit a dramatic home run in what was to become one of the great moments in baseball and one that added more fuel to the fire to the Yankees/Red Sox rivalry. This particular card has special meaning to me even though I am not a Yankees fan. It is the very first ever autographed card I ever pulled. A 1999 Upper Deck Century Legends Epic Signatures card. I was so very happy when I pulled this card, finally something cool I felt like a kid on Christmas morning. That was many years ago, but I remember that moment like it was yesterday. One of the many reasons that I love this hobby and that I love the game of baseball.
Posted by Eli at 12:33 PM 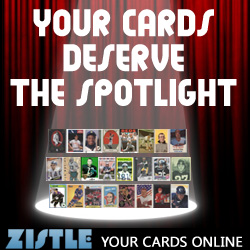